June arrives and so does the rain

The Safari has been mostly in the garden at Base Camp this week but we have been around a couple of local sites too.
We've had a little success with the moth trap but nothing to really get the pulse racing. To be fair the best catches this week have been non-moths like this tiny Caenis mayfly of which there were two on Monday morning. 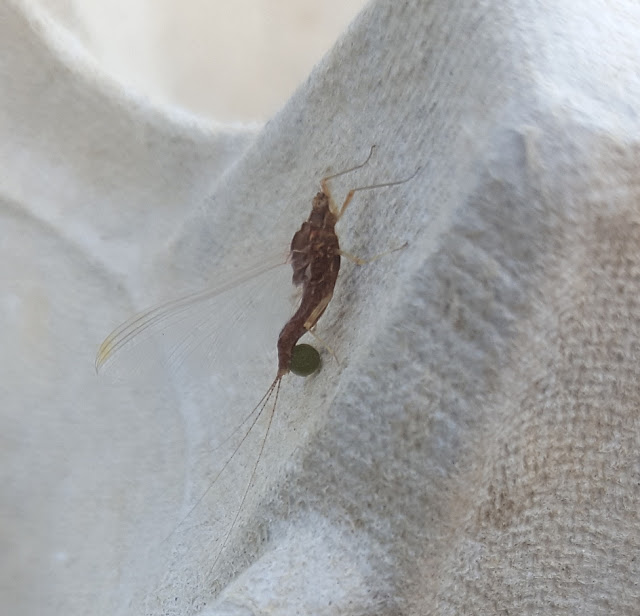 When the sun has shone, which hasn't been as often as we'd like this week, we've been down to the bottom of the garden where it's a bit wilder (Wifey says too wild!). Up there we came across the first 2-Spot Ladybird we've seen this year, not seen many ladybirds of any description yet, this one was a very small individual. 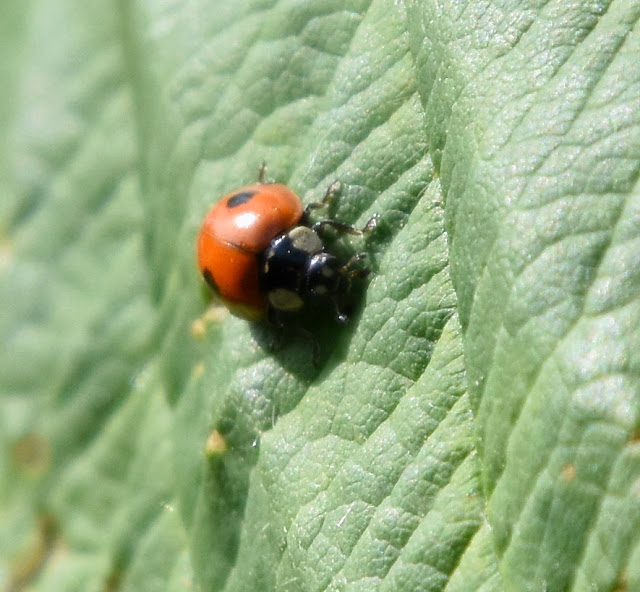 With not much happening we took ourselves back indoors for a brew where we found this crane fly bouncing around the kitchen window trying to smash the panes of glass to get out. Once it had come to rest we saw that it wasn't one of your 'normal' types of Crane Fly but from the family of Fold Winged Flies, Ptychopteridae. 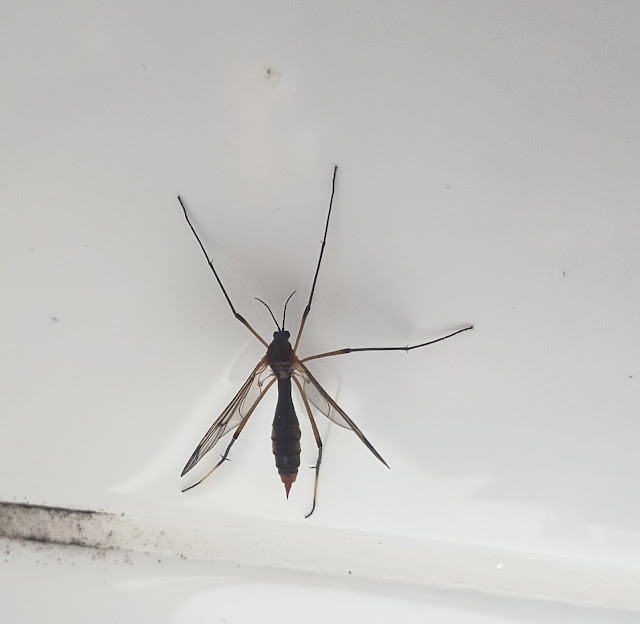 Later in the afternoon another Mint Moth was hanging round the pot plants..

The following morning we had a 'click & collect' grocery shop to pick up from the store. The van from which your shopping is parked at the top end of the car park and this morning there was a queue of cars waiting their turn so naturally we joined the end of it hoping it wouldn't be a long wait. We turned the engine off and wound the window down. There's not much in the way of vegetation anywhere near the store but the car park does have a few bushes which attract the local House Sparrow flock so we were listening to them chirruping away in the dense cover when we heard another call which sounded like a Coal Tit. We heard it again and it still sounded like a Coal Tit, can't be there's not a tree for miles and even further to the nearest conifers. Then a Coal Tit appeared in a little gap in the side of the line of bushes and hopped off only to be followed by a second - how mad is that - what a great shop car park tick. The Swift, or was there more than one, tazzing round the eaves of the terraced houses backing on to the car park was great to watch too.
After the shopping as safely stashed away at Base Camp we set off with the mutt for a wander round Woodland Gardens and Heron's Reach. As soon as we entered the wood this huge fungus caught our eye. Must be the best part of a metre from end to end. 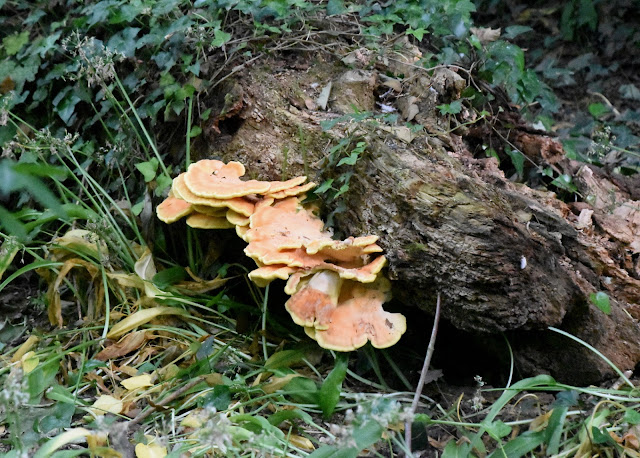 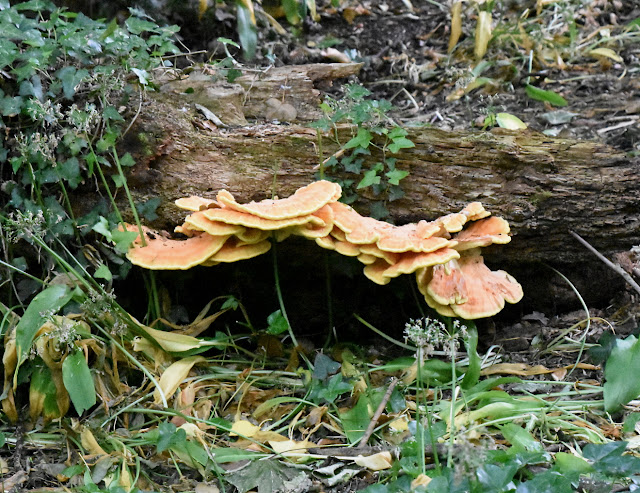 We're useless at fungi so if anyone can put a name to it let us know. The rest of the walk was mainly Blackcaps and Chiffchaffs but we did hear a Ring Necked Parakeet high above the old military pill-box  in the wood, could they have a nest somewhere up there we were there again today and heard one calling from the same place on the way out and the way back.
Mammals were represented by both Lion and Tiger but no Elephants as we peered over the zoo fence. The mutt's nose tells him there's something interesting on the other side of the fence but he hasn't a clue what as he's not tall enough to see over - probably just as well! What we didn't expect to see was a Rabbit a little further along the path and this side of the fence, can't remember the last time we saw one of those round there, if indeed we ever have.
We had a look under the usual amphibian refugia finding just a few Toads and nothing that we 'wanted' - the ground was very dry even under cover. 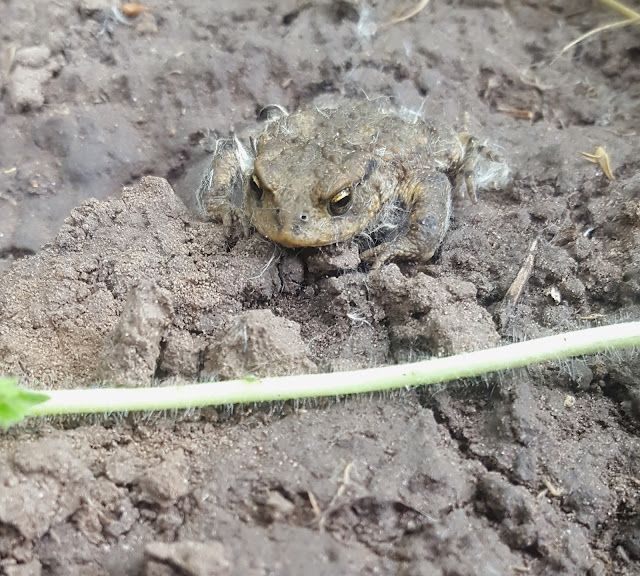 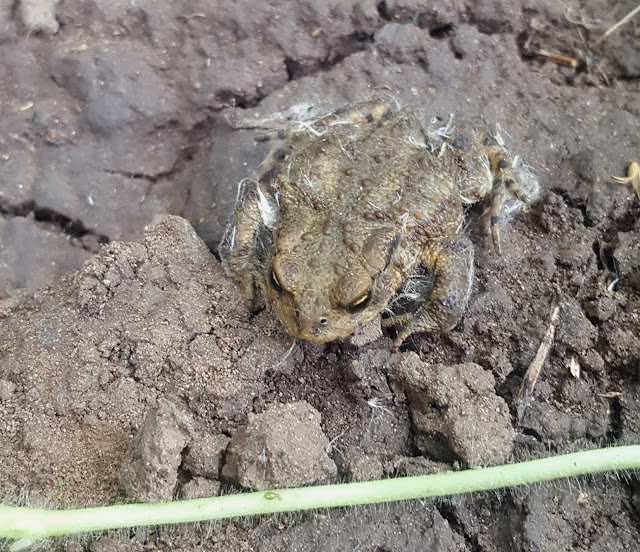 Back on the path a movement low in the undergrowth on the far side alerted our attention. Another Rabbit and a young one at that. Certainly wasn't expecting to see a second round there and this one was a good 200 metres from the first so almost definitely from another family. 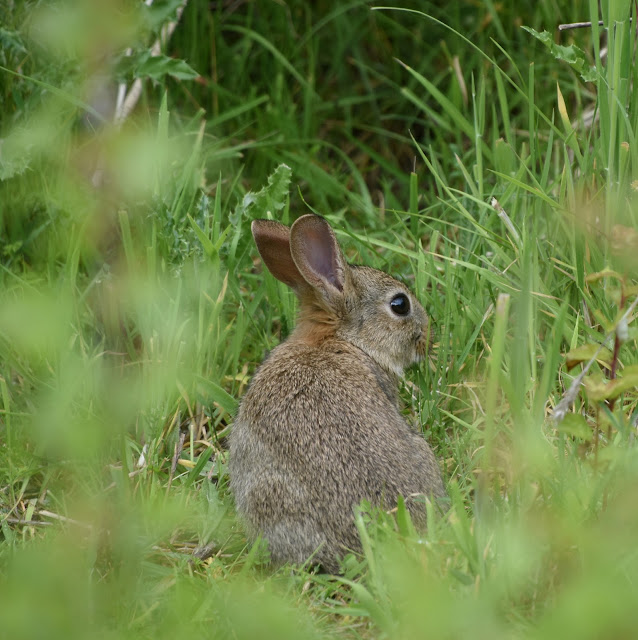 Some sunshine brought out a few insects like this Speckled Wood butterfly but far fewer than we would have expected especially bees of which there were hardly any. 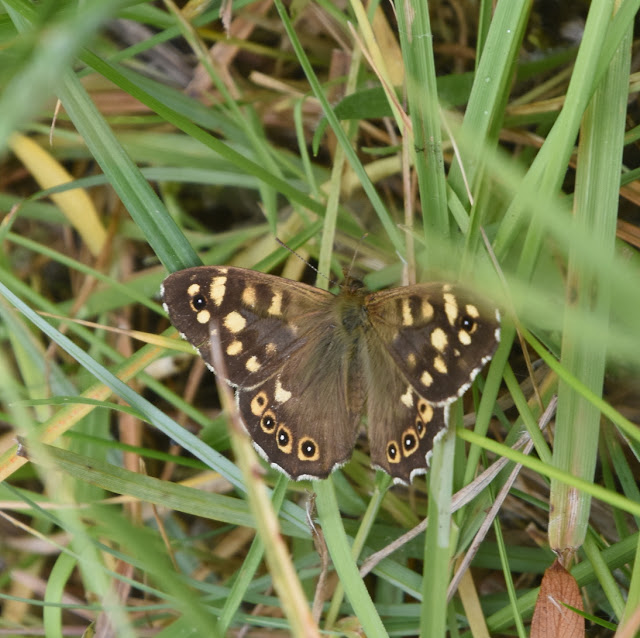 Wednesday saw the first appreciable rain for several weeks although despite it being prolonged and quite heavy it still hasn't done any more than dampen the ground.
In an attempt to attract the over-flying families of Starlings into the garden we've been putting mealworms out. Not a Starling in sight, they've even stopped flying over. But as soon as we put any mealworms out now the local Magpies and this individual Herring Gull are right on them, the gull having to do a precarious balancing act to get its beak in the tub.. 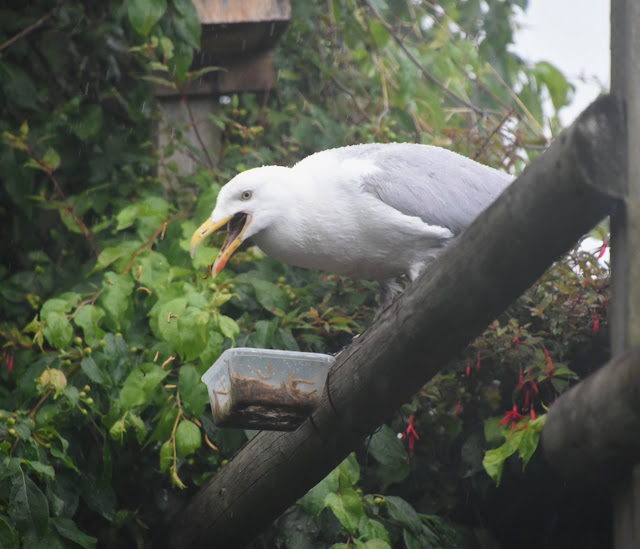 Also seen in the garden on a wet Wednesday were a second family of Greenfinches and the Great Tits are feeding young in our House Sparrow terrace - very late starting this year, they'd fledged by now this time last year.
Thursday finally gave us some moths and not Heart & Darts.
Also in the trap were a couple of Caddis Flies, this larger one is a Limnopphilus sp 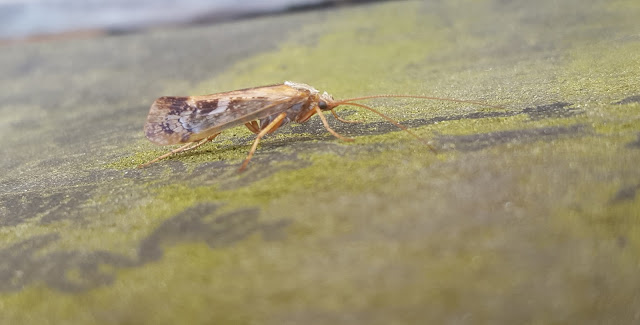 A much smaller one is as yet unidentified. 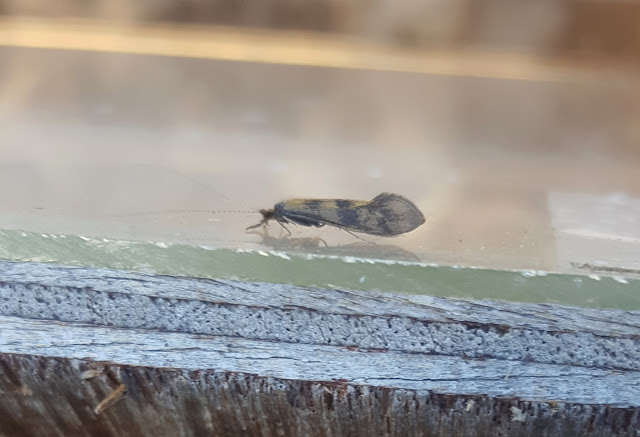 After breakfast we were down on the beach with the mutt. A few Moon Jellyfish had been washed up. No other species of jellyfish though although in recent days others have been reporting lots of Sea Gooseberries. 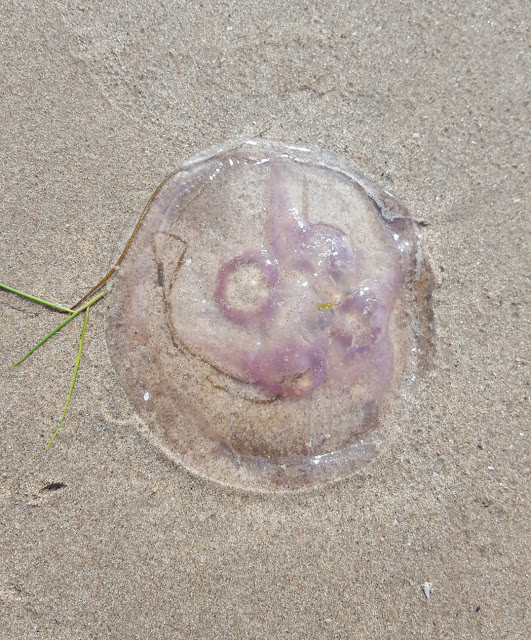 We also found a smallish Common Starfish alive and well and cruising slowly round one of the puddles left by the tide very close to the seawall. Also found nearby was this deceased Thornback Ray, another angling victim no doubt.. Juts look at the shadow of the spines along its tail - fearsome! 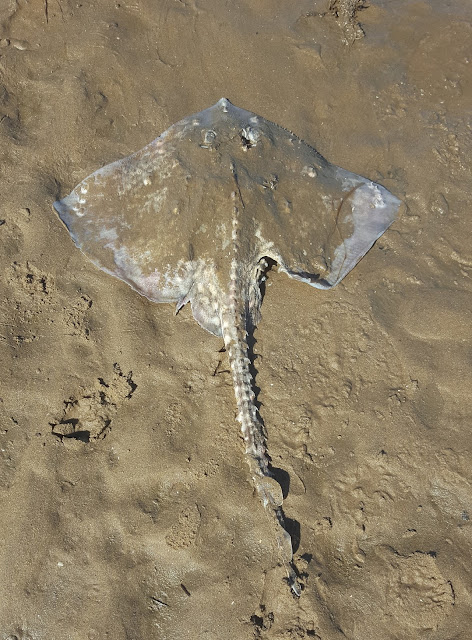 Along the cliffs we came across our first juvenile Pied Wagtail, waiting around a while we saw both the parents but no other youngsters.
Around the garden in the afternoon we concentrated on watching the bees
But also found some other little things like this Running Spider, Philodromus sp, and by eck could it run it was well wick even over the vertical surface of a pane of window glass!!! 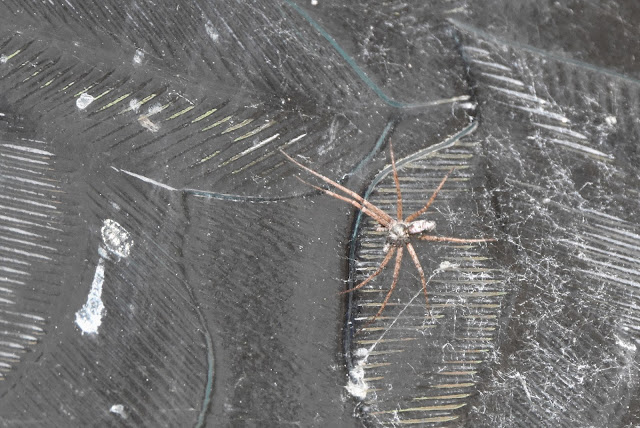 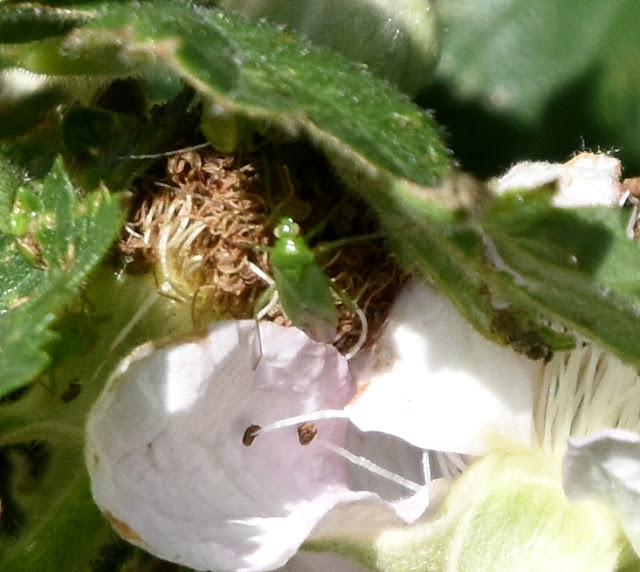 The bee we hoped to find didn't turn up. An apparently all black one that won't keep still.
We did finally catch up with it at the weekend - do we still have weekends? A Leaf  Cutting Bee, probably Megachile centuncularis. 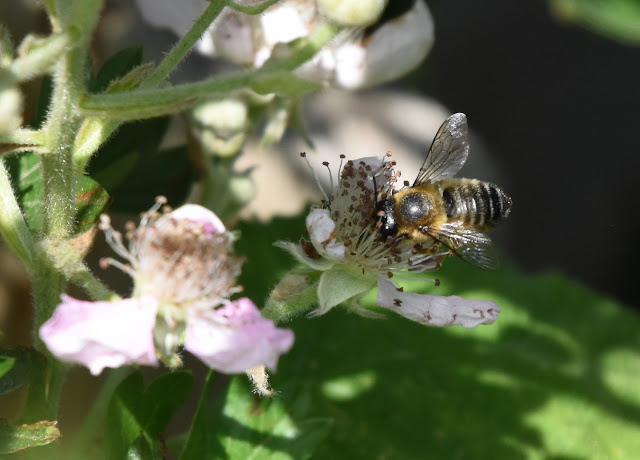 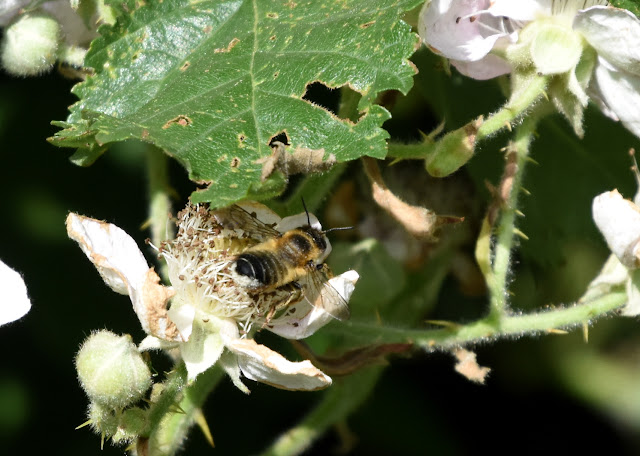 We've seen both the male and the female but haven't seen the female carrying leaves yet although in the bottom pic it's collecting pollen.
On Sunday we had an early morning wander round the Rock Gardens seeing a pair of Whitethroats feeding young and another male singing from the opposite end of the field.
Back at the bottom of the garden we came across this small black wasp. It's believed to be one of the five (or six - depending on which taxonomist you read) Pemphredon species although a profile pic would have been useful to rule out other genera but it didn't hang around long enough for that and we haven't seen it since. 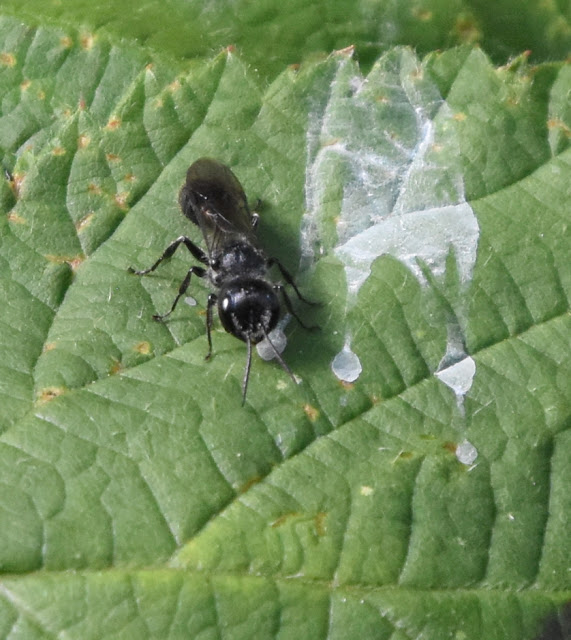 If it is one of those none of them have been recorded in the Fylde before.

As dusk fell we had our first House Sparrow on the new millet feeder in the back garden. Probably the same male that came a couple of times when the feeder dispensed suet pellets but hasn't been seen since. All we need now is for it to come back during the day to have his photo taken, and we'd be quite happy for him to bring his family along too - we need them - - we jumped in with both feet and got 17kg of red millet delivered.

All in all a pretty action packed week on safari.

Where to next? With lockdown being eased even further  we're going to be a bit more adventurous and have some further flung safaris planned.

In the meantime let us know who's Been visiting your outback.

Remember to stay safe and socially distant while enjoying the wildlife round your way.
Posted by Lancashire and Lakeland Outback Adventure Wildlife Safaris at 15:08